$4 Million Diamond-Encrusted Trainers to be Auctioned for Charity 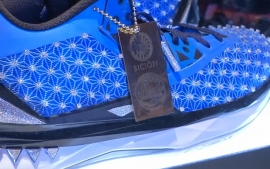 Luxury haute couture brand Bicion and designer Dan Gamache have produced a pair of the world's most expensive trainers - a pair of custom Li-Ning Dwyane Wade shoes decked out with hundreds of carats of white diamond pieces and blue sapphires set into gold - costing $4 million. The trainers were unveiled in New York. They will be auctioned off to benefit the Soles4Souls - a US-based charity that collects new and used shoes and redistributes them through direct donations to people in need. The organisation has donated 26 million pairs of trainers in over a hundred countries since 2006.

Watch the video of their presentation here.