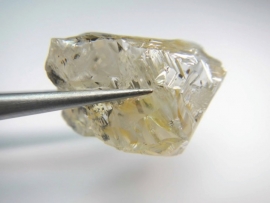 Lucapa Diamond Company has discovered a 68.1-carat Type IIa D color diamond at trial mining operations at a new area within its Lulo operation in Angola. The miner said that the gem was among eight special diamonds recovered during a trial mining operation at the E46 alluvial terraces which is about 10 km upstream from the alluvial Mining Block 8 and 6, from which Lucapa has been producing diamonds. "The latest special recoveries in the middle of the Lulo mining license increase management's confidence that large valuable diamonds should continue to be found along the 51km stretch of the Cacuilo river," Lucapa said in a statement.