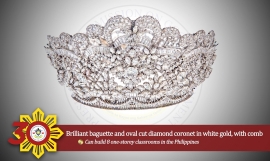 To raise public awareness on the Marcos' two-decades of plunder during martial law from 1965 to 1986, the Presidential Commission on Good Government (PCGG) on March 16 launched an online exhibit of selected pieces from the Hawaii jewelry collection, one of the three massive jewelry collections hoarded by Marcoses. This collection was seized by the US Bureau of Customs upon the Marcoses’ arrival in Hawaii in 1986 and is currently stored at the Bangko Sentral ng Pilipinas (BSP). The Virtual Jewelry Exhibit, A Story of Excesses is a public awareness campaign leading up to the general elections on May 9, in which three Marcos family members are running for office. Marcos’ only son, Ferdinand Jr. is currently a senator and is a frontrunner in the vice-presidential race. His sister Imee is seeking to renew her gubernatorial seat. And their mother Imelda, the 86-year-old former first lady who amassed a $21 million collection of diamond tiaras, brooches, necklaces, and other jewels (as well as over a thousand pairs of shoes), is campaigning for a third term in the Philippine Congress.

The Commission believes that it is its duty to remind Filipinos, especially the youth, of this chapter in the country's history - which is not to be found in the history books. Through this online exhibiton on PCGG's Twitter and Facebook pages showing the family’s collection of diamonds, gold, even tiaras, the PCGG hopes that the youth can visualize how the Marcoses abused the government coffers. Along with descriptions of the ill-gotten gems, the PCGG also used the US dollar-to-peso exchange rate to show the equivalent values of these precious stones inv view of what they could have financed in terms of education, health, agrarian reform, alleviation of poverty and other pertinent government development programs.