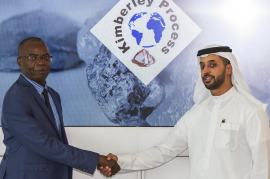 An UAE-sponsored initiative aimed at standardising pricing mechanisms for the rough diamond trade is due to be launched later this year under the country’s chairmanship of the Kimberley Process, reports UAE daily The National. Some may view this move as ironic, as it comes in response to criticism of trade and transfer mispricing practices within the diamond trade, which NGOs claim has deprived diamond producer states of crucial tax revenue - and UAE is considered the main practitioner of transfer pricing. "Criticism has centred on Dubai’s role as a major diamond export hub, with NGOs accusing the UAE authorities of turning a blind eye to such practices, and thus being complicit in the illegal flow of wealth out of African diamond producers," writes The National.

“We feel that should address all the questions that have been raised and start a dialogue on valuation, and we’re planning to hold workshops to start the process," said Kimberley Process chairman Ahmed bin Sulayem. “We need to see whether it’s a UAE issue, or whether it’s an issue with producing countries or if it’s an industry-wide problem, and then come with ideas on how we can tackle the problems." Unlike other commodities, there is no global standardised pricing mechanism for rough diamonds, opening the door for numerous abuses in the supply chain between producers and exporters. The UAE plans could potentially undermine the work of the KP subgroup on valuation, led by the WDC and mandated to map current valuation methods across KP Participants when determining value on KP certificates.

An Amnesty International report on the global diamond supply chain, published in September, highlighted how opaque valuation practices enable international diamond traders to make a large profit at the expense of diamond producing countries. “Minimising export taxes by undervaluing diamonds means that diamond-producing countries receive far less revenue from taxing diamond exports than they would if the diamonds were exported at their market value."

Amnesty's report was particularly hard on Dubai in this regard, stating: "Dubai has come in for particular criticism because of the significant difference in the value of its rough diamond imports and exports and the fact that it does not tax diamond traders. Diamond traders in Dubai benefit from various free trade zones, including the DMCC and the Dubai Airport Free Zone Area (or DAFZA)." It explains that, "As such, a company could export a diamond at a low value from a developing country; the diamond could then enter Dubai where the importing company marks-up the price and exports it to a related company in another trading or cutting / polishing centre. No tax is payable in the free trade zones in Dubai, so the company in Dubai makes a substantial non-taxable profit."

Mr. bin Sulayem – who is also the executive chairman of the Dubai Multi Commodities Centre – said that the studies on valuation would look at Dubai’s role within the trade. “No country’s diamond market is perfect, and everyone major diamond centre has its own challenges," he said. “I’m not going to point fingers at anyone else, though. Through these studies and workshops we’ll look at where the main issues are and how we can resolve them." The Civil Society Coalition (CSC), a group of nine NGOs, announced in September that it would boycott the Kimberley Process during 2016 because of a breakdown of trust with the UAE, specifically raising the issue of undervaluation of diamonds entering the country. “I think it would be a huge mistake for them not to participate in the Kimberley Process, and I don’t believe they would risk all the hard work they’ve done up to this point."