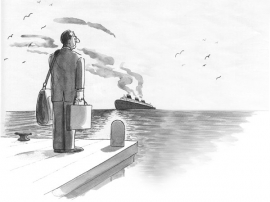 Bart De Hantsetters, Chairman of the Syndicate of the Belgian Diamond Industry, discusses the need to embrace the new forces ‘disrupting’ a traditional business like the diamond trade. The ship of innovation is setting sail with or without you, so it is better to get on board – as Antwerp has – and build the new on the foundations of the old.

Previously I elaborated on the difficult year behind us. Official Antwerp figures published in February confirmed what was felt so acutely throughout the industry; an 18% decrease in the total value of traded goods, razor-thin profit margins, and so on. Remarkably, compared to competing diamond hubs, Antwerp seemed to have weathered the storm relatively well. Both Israel and India suffered bigger losses, as they recorded no less than a 25% decrease in traded goods year-on-year.

The new year seems to indicate the industry is off to a fresh start. For the first time in months, in February, more rough goods were traded in Antwerp. Analysts are speaking of cautious optimism that the market is recovering. That sentiment was confirmed at the March fair in Hong Kong. Reports say more buyers were welcomed and more goods were bought and sold, albeit modestly, both in terms of volumes as in terms of profit margins.

Evidently it is much too early to proclaim we have reached a turning point. And if there is one thing the past year has taught us, it is undoubtedly that more rough being available on the market can signify many things. More importantly, it does not necessarily indicate something about the long-term or the profitability of those rough purchases.

What may very well be the most valuable lesson we should learn from the past year is that the world around us is changing very rapidly. More so, the diamond industry is no longer the island it has been for the past decades, immune to what was going on outside the borders of our proverbial kingdom.

We often hear, from inside and outside our industry, that tradition and habits constitute the essence of our business. They are embedded in our discourse, in our business models, in our ways of thinking and trading. We proudly speak of the “mazal”, because a word is much more valuable than a piece of paper in our industry; about the fact that craftsmanship and knowledge, whether you are a trader or a polisher, is something that can’t be taught in school, but is passed on from the master to the apprentice, slowly and bit by bit.

This, of course, is only partly true. The intellectual heritage, the craftsmanship, the accumulated knowledge and the strong historically character of our diamond community together form the foundation on which Antwerp continues to build. But cherishing those traditions and that (intellectual) inheritance should lead to neither a standstill nor conservatism.

At virtually every level of society, so-called disruptive forces are impacting us, whether it concerns how we maintain relationships with friends and family or do business. The diamond industry is no exception. Just looking at the trade press, it is fairly obvious we are not immune to the challenges this ‘disruption’ is bringing about, whether we like it or not. Or, as industry commentator Charles Wyndham put it last year, "Horrors of Horrors, the real world is actually creeping into our world of diamonds. If the diamond industry is going to progress, it has got to realize that it is not some prima donna to whom some of the more normal rules of business do not have to apply.” A few examples from the recent past perfectly illustrate what I am talking about.

Late last year, the entire world got fired up about the news that diamond miner Lucara dug up an historic rough diamond of no less than 1,111 carats. While the media raved about the exceptional find of the second largest rough stone ever unearthed, the Canadian miner’s recovery that very same week of the sixth largest gem quality rough diamond – 813 carats – and another weighing 374 carats did not make the headlines. Nonetheless, finding three remarkable rough stones in one week is by no means an ordinary achievement, though we can expect more extraordinary finds to come.

This is because these discoveries were not entirely coincidental. Not long before these rough stones were found, Lucara started using ‘Large Diamond Recovery (LDR) XRT-machines’, a new technology able to scan dug up ore better and more precisely before the material gets crushed, which is quite different from common practice. Therefore, chances are that we will be seeing more of these highly exceptional rough stones popping up in the future.

The story of this exceptional discovery, the Lesedi La Rona, perfectly illustrates the dilemma we businessmen are increasingly confronted with these days; how can I stay up to speed on the latest trends and developments, how can I optimize my company’s bottom-line, in which technology am I willing to invest? These decisions always imply a reasonable degree of uncertainty, but what is certain is that closing your eyes to new things is not the direction you should choose.

And I’m not only talking about the manufacturing segment of our industry. One industry that has perhaps been most impacted by this changing world is the financial business. A series of crises have put a heavy strain on the traditional business models in this industry. Just think about the new rules formulated in Basel III; serious over-leveraging of diamond businesses in certain diamond hubs, and; the paralyzing “derisking” trend – the overeager shunning of potentially ‘high-risk’ industries without any plausible cause. These developments haven’t missed their effect on businesses across the board, not in the least the diamond industry.

To a great extent, financial institutions themselves seem to be struggling to bring solutions to the table. They too are realizing that the borders of their domain have faded. In this context, representative organization AWDC recently held a seminar dedicated to the concept of FinTech, an initiative that received much interest within the industry. FinTech companies, in most cases start-ups in the field of data and technology, aspire to couple their expertise with the financial world. The term FinTech is used to describe all sorts of innovative, financial products that aim to make the way we deal with money faster and easier. The most well known FinTech product is undoubtedly PayPal, but also mobile banking applications and online investment platforms are common examples.

During the presentation of the two companies with which AWDC is setting up a pilot project, it became clear that ‘disruption’ must be more than a trendy name. There is no such thing as one-size-fits-all solution, as both companies came to understand very well after the seminar. Nevertheless, innovation is a two-way street; it demands open-mindedness and requires the time and space for a little seedling to grow.

It is too early to say if FinTech can be more than an interesting idea, and it is clear that an ideal FinTech model suitable for our industry requires much more work. But killing off the idea just because it doesn’t correspond with ‘the way we as diamantaires are used to doing business’ is equally shortsighted and won’t help us any further. As always, the truth – and the ideal scenario – lies somewhere in between. Those who are interested to jump on the bandwagon of innovation, diamantaires and FinTech promoters alike, have to be willing to think outside the box.

A last, recent example of how disruption is impacting our industry was raised in an opinion piece by Nurit Rothmann, an Israeli diamantaire. Rothmann refers to a letter allegedly signed by over 600 Israeli diamantaires. In this letter, they request to make it obligatory for dealers in rough diamonds to disclose the fact they have a report that provides a detailed mapping of a rough stone, indicating inclusions and such. The technology to scan rough stones to this degree has been around for quite a while, but rough diamonds are still commonly sold ‘on sight’. Their argument is that whoever has such a report knows exactly what to expect, and thus, what profits can or cannot be generated from a particular stone. The mandatory disclosure of the existence of such a report, the promoters of the idea say, would highly increase the level of transparency as well as provide a level playing field for everybody.

I will not comment on whether this idea makes sense or is sheer nonsense. I merely want point out again that things around us are changing, and we can’t control these things the way people used to do some ten, fifteen years ago. You see, there are many more examples of disruptive forces out there. How will we approach the fact that more and more synthetics are entering the market, disclosed and undisclosed? How will we convince tomorrow’s consumer to buy our product? How can we motivate young people to step into the business? Is it feasible and relevant from a societal perspective to push for full traceability, from mine to finger?

As Socrates put it: “The secret of change is to focus all of your energy, not on fighting the old, but on building the new.” Antwerp might be building on over five centuries worth of diamond heritage, but compared to of our competitors, focusing on the new is precisely where our strengths lie.