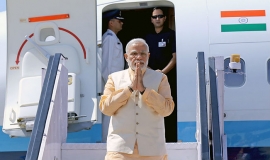 Prime Minister Narendra Modi will visit Brussels on March 30 to attend the first India-European Union summit in four years. Hopes are high that the first visit of an Indian prime minister to Brussels in six years will reinvigorate EU-India ties and inject new momentum into the relationship, possibly resuming dialogue for a Free Trade Agreement (FTA) which hasn't materialized despite eight years of negotiations. Manjeev Singh Puri, Indian ambassador to the EU said, "We hope to use this summit to ensure that whatever may have happened, a few little slip ups here and there, we are back on the rails for bilateral meaning and collaborations which is for global good," Puri said at an event on EU-India relations. "We are the world's two largest democracies, we encompass diversity. We have 22 official languages in India. You, in the EU, have 24. We have 29 federal states, you have 28 member states. This itself should give you the idea why there is a sense of comfort which should be driven by far greater invigoration," he said. "We hope to see a vastly invigorated modern relationship," he added.

Prime Minister Modi's visit to Belgium will be followed by a visit to Saudi Arabia as part of a three-nation trip starting 30 March, during which he will also visit Washington to attend the Nuclear Security Summit. The Strategic Partnership between India and the EU was established in 2004, four years after the decision to hold Annual Summits. There was considerable enthusiasm when this visionary document was consolidated. It was followed by a Joint Action Plan in 2005, and the launch of negotiations for India-EU Bilateral Trade and Investment Agreement (BTIA) in 2007. India had then set an ambitious target of two years to complete negotiations. No one had imagined that talks would drag on for nine years with no end in sight. The EU was India’s largest trading partner in 2014. Total bilateral trade during 2014 was $135 billion. India’s exports were $68 billion and imports $66.9 billion.

The Europe India Forum is also helping organize a Community Reception on 30 March for people of diverse backgrounds to celebrate the visit of the Prime Minister. The event will be held in partnership with Indian cultural and community organizations in Belgium, and is set to be a historic one for the Indian Community in Belgium. The Europe India Forum is a not for profit organisation promoting Europe-India relations for communities, by communities. Last November, Modi visited the UK, drawing 60,000 people to see him at Wembley Stadium.