Behind The Glamour in Basel, Diamond Industry in Distress 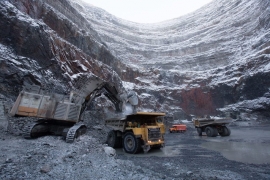 Against the lavish backdrop of Baselworld, "the glittery industry fair, where the latest innovations in timekeeping are unveiled and gem-encrusted baubles from the likes of Chanel, Chopard, Patek Philippe and Graff tempt buyers from around the world," Kati Chitrakorn writes for Business of Fashion that all is not well in the diamond industry backstage. "Acute pressure has been mounting on the industry’s $80 billion diamond market. While diamonds were once the benchmark of jewellery collecting, slowing demand in key markets such as the United States, China and the Middle East has sent a ripple through the global diamond pipeline, driving prices down by nearly 25 percent in 2015 ... Although rough and polished diamond prices saw some recovery in February this year, caution remains as global demand for diamonds is still relatively weak ... And while cheaper gems may be good news for consumers, it is not for those working in the sector."

Talking to analysts and representatives from every segment of the diamond pipeline - from mine to showcase - Chitrakorn identifies the global domino effect that results from plunging prices and slowing demand. It derails the (primarily Indian) manufactuing sector and causes miners to cut back their production, leaving a trail of closed factories, shuttered mines and lost livelihoods behind, as 'consolidation' becomes a synonym for 'closure'. The key issue, however, are the "inflated expectations" on the part of retailers and manufacturers alike for continuing growth, which encouraged them to overreach, and is now forcing them to readjust. Chitrakorn also takes a look at the challenges ahead, from convincing Milennials to invest in the diamond dream to holding off the rise of synthetic diamonds.