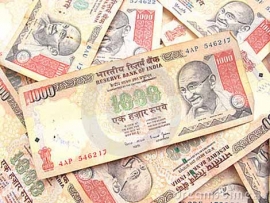 In the summer of 2013, India-based diamond trading company Winsome Group allegedly defrauded a number of public-sector banks of several billions of rupees and routed most of the money offshore, accumulating defaults upwards of $1 billion on loans from a consortium of 15 banks in India. This made the diamond house the country's second-largest wilful defaulter after Kingfisher Airlines. "Now," writes the Economic Times, "with the Central Bureau of Investigation snapping at banks' heels, desperate lenders are threatening to name and shame some of the former and present independent directors of Winsome Diamonds & Jewellery and another group company, Forever, to salvage their money."

"In a rare and harsh move, Punjab National Bank, with exposure of Rs 1,800 crore ($261.5 million) — the highest in the consortium — has shot off letters to three persons asking them to help in arranging repayment, failing which the bank would declare them 'wilful defaulters' and even publish their names and photographs in newspapers. They are Harimohan Namdev, a practising company secretary; Madan Khurjekar, a former banker; and Urvashi Saxena, who was a senior official with the income-tax department. Namdev is still on the board of Winsome." The problem, as the directors pointed out, is that Reserve Bank of India rules state that independent directors cannot be declared 'wilful defaulters' for a company's failure to repay loans. Khurjekar wrote the Economic Times that, "A wilful defaulter tag, besides the stigma attached, could close doors of all banks for future loans. Also, Securities & Exchange Board of India has recently proposed that a person declared wilful defaulter would be barred from the boards of listed companies."

Addding to the intrigue is the saga surrounding Winsome promoter Jatin Mehta, who resigned from Winsome's board in 2012 and relocated to Dubai. He attributed his inability to pay the banks to the default on payments by the group's buyers of gold based in UAE. "Banks in India, however, do not buy this story. They have declared Winsome a wilful defaulter and suspect the authenticity of these UAE 'clients'. Bank officials' trips to Dubai and an undisclosed forensic report prepared by a leading consultant deepened their suspicion. Mehta categorically denied when asked whether money from Indian banks was used to sponsor IIa Technologies, a Singapore firm that has emerged as one of the global leaders in the manufacture of man-made or lab-grown diamonds. Vishal Mehta, a family member of Jatin Mehta, is a director in IIa Technologies. "I have no connection with IIa Technologies," said Jatin Mehta." Another theory, advanced by the Times of India in 2014, points to a criminal conspiracy by the company to divert a part of the loan to businesses outside India, with the TOI claiming to have documents that raise suspicion that the money was diverted to real estate investments in Mumbai and Dubai."