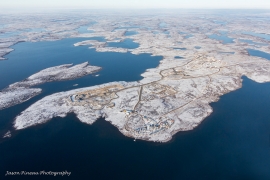 Mountain Province Diamonds Inc. reports that the Gahcho Kué diamond mine is progressing according to plan with the overall project more than 87% complete and on track for first production during the second half of this year. Mountain Province Diamonds is a 49% participant with De Beers Canada in the Gahcho Kué diamond mine located in Canada's Northwest Territories. Gahcho Kué is a cluster of four diamondiferous kimberlites, three of which have a probable mineral reserve of 35.4 million tonnes grading 1.57 carats per tonne for total diamond content of 55.5 million carats. The diamond mine is expected to produce an average of 4.5 million carats a year over a 12-year mine life.