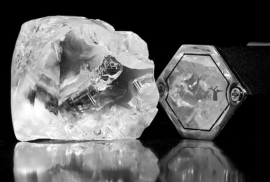 Gem Diamonds has released its Full Year Results for the year ending 31 December 2015, showing profit for the year up 12% to US$67.4 million as compared to $60.4 million a year ago. This positive figure was achieved despite revenue declining 8% to $249.5 million as compared to $270.8 million in 2014. Earnings per share (pre exceptional items) were also up 26% YoY to 30.2 US cents. A maiden dividend of US$6.9 million (5 US cents per share) was paid to shareholders in June 2015 in respect of 2014, and following the positive results achieved in 2015 the Board has recommended the payment of an ordinary cash dividend of 5 US cents per share (US$6.9 million) which will be proposed at the 2016 Annual General Meeting. In addition, a special dividend of 3.5 US cents per share (US$4.8 million) will also be proposed representing the cash saving arising from the settlement of a previous tax assessment.

Gem's key asset is the Letšeng mine (Lesotho), renowned for the production of large, top colour, exceptional white diamonds (see this interview for an in-depth look at Gem's manufacturing of Letšeng diamonds). Despite the sharp market downturn during 2015, revenue generated from the sale of Letšeng diamonds remained robust at an average of $2,299 per carat ($2,540 in 2014) from the sale of 102,778 carats. The strong prices achieved, together with a number of strategic imperatives such as continuing investment in low capital projects at Letšeng that deliver quick paybacks with high returns and driving operational costs down contributed to their healthy profit. Their introduction of innovative technology to reduce diamond damage has led to more consistent large stone recoveries. "Before these interventions, an average of six diamonds greater than 100 carats were recovered per year, whereas in 2015, the Group recovered 11 diamonds greater than 100 carats, the largest of which was the 357 carat ‘Letšeng Dynasty’. This exceptional diamond was sold for US$19.3 million, achieving the highest price for a single diamond from our Letšeng mine – a truly noteworthy achievement in a depressed market."

Commenting on the results today, Clifford Elphick, Chief Executive Officer of Gem Diamonds, said: “It is pleasing to see that the prices achieved for Letšeng's diamonds during 2015 have remained robust despite the sharp downturn in the global market. The world class, high quality diamonds, for which Letšeng is renowned, have contributed to the strong results at an average price of US$2 299 per carat for the year. Although 2015 was a challenging year for the diamond mining industry, it is encouraging to report that the Group has delivered a strong set of operational and financial results. The Group continued to implement its strategic objectives of capital discipline by investing in low cost high return capital projects. The increase in the recoveries of the important +100 carat diamonds from an average of 6 per year to 11 in 2015 demonstrates the success of the initiatives.”