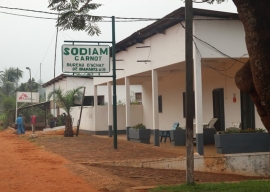 Pending a positive recommendation by the Kimberley Process (KP) monitoring team - consisting of representatives of the various KP working groups and civil society - after consideration of the results of their review visit to the Central African Republic (CAR), the resumption of rough diamond exports from CAR is looking increasingly possible. While the account by UAE daily The National claiming that the deadlock has been broken due to the efforts of UAE in its role as KP chair is somewhat precipitous, there are definitely positive signs that the path to CAR's reinstatement has become smoother after an agreement was struck between the CAR’s minister for mines, Joseph Agbo, and Viken Arslanian, an executive of Sodiam, the CAR’s main diamond miner.

Although Sodiam has mined diamonds, mainly at the country’s Berberati mine, since CAR diamond exports were banned, it has been impossible to export them under the rules of the KP banning trade in “conflict diamonds", and Sodiam said it might be forced to close down operations in CAR in view of the uncertainties around future exports. Keeping Sodiam engaged with the process is therefore a priority that seems to have been neglected until now. Resumption of diamond exports in the CAR will be a boost for its impoverished economy, writes The National. A visit by KP officials earlier this month found that living conditions in Berbarati were a “matter of enormous concern and require an immediate solution". The officials also found that the area around the town were under “appropriate and sufficient" government control. It is now up the KP to decide what to make of seemingly contradictory findings such as these, and to put them in the balance with the dire need for revenues in the impoverished country.