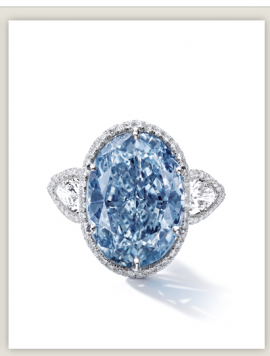 A 10.10 carat vivid blue diamond is expected to set the record for the most expensive piece of jewelry sold at auction in Asia despite an ongoing growth slowdown in China's economy, Sotheby's said Friday, writes Daily Mail. The "De Beers Millennium Jewel 4" is expected to fetch between $30 million and $35 million at the April 5 sale in Hong Kong. The auction house describes it as, "a superb oval internally flawless fancy vivid blue diamond weighing 10.10 carats, which is the largest oval fancy vivid blue diamond ever to appear at auction." The diamond, which is slightly larger than an almond in size, came from South Africa's Cullinan Mine and was one of 12 displayed at London's Millennium Dome to mark the year 2000. "There are no more than a dozen or so blue diamonds of fancy vivid color and over 10 carats in the world, so they are very, very rare," Sotheby's Deputy Chairman for Asia Quek Chin Yeow told AFP.

The sale will come five months after the 12.03-carat "Blue Moon of Josephine" was bought for a record $48 million in Geneva by an Asian property tycoon - a further sign the jewellery auction market remains strong despite slowing Chinese growth. The world's second-largest economy expanded 6.9% in 2015, the worst performance in a quarter of a century and a far cry from years of double-digit increases. "Of course people are concerned about the China slowdown" Quek said, but added that sales of rare items seem to be largely unaffected by growth numbers. Sotheby's describes the diamond thusly: "De Beers Millennium Jewel 4, a superb oval internally flawless fancy vivid blue diamond weighing 10.10 carats, which is the largest oval fancy vivid blue diamond ever to appear at auction."