Is ‘Ethical’ Marketing of Natural Diamond Substitutes A Double-Edged Sword? 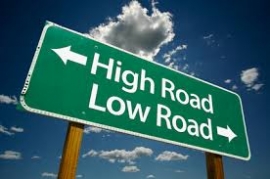 In his latest article, "How Do We Talk About Ethical Sourcing?", Rob Bates of JCK unpacks some of the key tensions lurking underneath marketing strategies that promote the ethical or eco-friendly advantages of synthetic diamond products, and even some of their natural counterparts. Analyzing recent statements by Suzanne Miglucci, the new president and CEO of moissanite manufacturer Charles & Colvard, Bates points out how the strategy they imply could rub retailers the wrong way and even involve "certain perils" when it comes to integrating into the diamond industry as a whole. "Discussing her company’s new strategy," Bates writes, "[Miglucci] talked up the growing importance of millennials in the market and how they favor responsibly sourced products. Which makes them, she concluded, the perfect market for 'ethically sourced' ForeverOne brand. To drive her point home, she took several shots at gem mining. 'It’s also astounding how little people know about the mining of gemstones in general and what that does to the environment,' she said at one point. At another, she said, moissanite is 'untainted by human rights abuses, environmental degradation, or wartime conflicts.' "

Bates sees two problems with this approach: "First, the substantive: ... Miglucci is calling moissanite ethical only in comparison to natural diamonds", which by no means proves that they are ethical per se. "But there is also a business problem here: This strategy is inherently negative." Why is this an issue? "A while ago, an executive from Charles & Colvard said some retailers didn’t want to stock moissanite because 'they are afraid that [moissanite] will cannibalize sales from their diamonds, and they have already made the investment in their diamonds.' It’s hard to see how talking about the problems in gem mining - which could actively hurt sales of natural diamonds - will decrease this resistance." This is also the case with synthetic diamonds, and even 'fair trade' natural diamonds. "The fact that this was an issue shows that many retailers - and the rest of the industry - are still quite sensitive about these topics. So if they are worried about a product badmouthing the rest of their inventory implicitly, how will they be expected to react to a company that does so explicitly?", Bates asks. And while he hopes the negative campaigns will generate progress from the natural diamond industry, the real risk is that the strategy that makes alternatives to natural potentially appealing could undermine the 'coexistence' of the two camps.