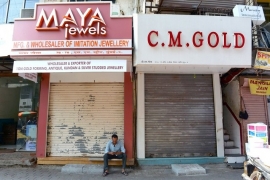 India jewelers are estimated to be losing about $150 million a day in income from a shutdown protesting a proposed 1% tax enters its second week, the All India Gems & Jewellery Trade Federation told Bloomberg. Shops will stay closed until the government assures jewelers that a 1% duty proposal is withdrawn, said Bachhraj Bamalwa, a director at the federation, which represents 300,000 jewelers and bullion dealers across the country. Finance Minister Arun Jaitley announced the tax on jewelry produced and sold within the country in his budget speech at the end of last month as part of the government’s efforts to boost revenues.

The strike is all the more costly for jewelers since they are missing out on rising gold prices, which have surged almost 20% this year as demand for safe haven assets rise due to volatility in financial markets. “We fear this tax is going to harm the industry and affect the livelihood of all artisans and manufacturers,” Bamalwa said. The federation, along with a second trade group, the India Bullion and Jewellers Association, has lobbied the government to replace the tax with a 1% rise in the import duty on gold. A similar shutdown in 2012, when jewelers closed for three weeks, was successful in getting the previous government to drop plans for an excise duty.