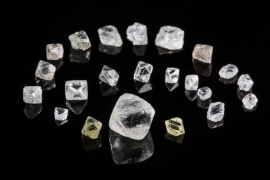 Peregrine Diamonds has announced that the results of an independent diamond valuation for an aggregate 735.75 carat parcel of commercial-size (+1.18 mm square mesh) diamonds recovered from five geological units of the CH-7 kimberlite pipe at the Company's 100% owned Chidliak Diamond Project, Nunavut, Canada yielded a base modelled price of US$114 per carat. The current average price was US$100 per carat, and ranged from US$73 to US$154 per carat across parcels from the five geological units represented. The modelled average price ranged from a low of US$94 per carat to a high of US$155 per carat. The eight highest value diamonds ranged in size from 1.35 carats to 5.33 carats, weighed 21.58 carats in total, and had a current average price valuation of US$1,619 per carat.

The diamond valuation was undertaken in Antwerp, Belgium by WWW International Diamond Consultants ("WWW"), an international diamond valuation and consultancy company. Neil Buxton, responsible for geostatistical modelling at WWW stated "based on our analysis of the parcel, WWW believes that if CH-7 were in production in the current diamond market, it is unlikely that the average price would be lower than the low average modelled price. It is equally important to understand that the high average modelled price does not represent a maximum price and that the ultimate diamond price could be higher than US$155 per carat. These results need to be confirmed with a larger sample." Tom Peregoodoff, Peregrine's President and CEO stated that the results offer, "further confirmation that Chidliak is Canada's highest potential undeveloped diamond resource."

WWW further stated that "The overall parcel valued by WWW presented well in terms of quality, colour and shape. Around 25-30 percent of the diamonds were classified as white gem goods which attract the highest prices. There was very little boart present and brown diamonds made up only 25-30 percent of the parcel. Fluorescence is another issue which can affect value, particularly that of the gem white goods. WWW therefore tested several gem, white goods across various sizes from the parcel and although some light fluorescence was present, very few stones showed strong fluorescence".