The Story of Stornoway: 'There's No Substitute for A Diamond' 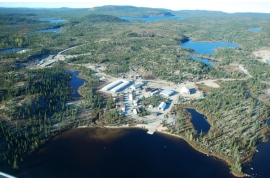 "Junior miners almost never make the leap into successful producers with large-scale operations and happy shareholders", writes the Financial Post. "But Stornoway Diamond Corp., which is on track to bring Quebec’s first diamond mine into production this year, showed it really can be done, even in a rough market. Unfortunately, it would be pretty tough to replicate the Stornoway model. It required being in the best possible jurisdiction, great exploration success, incredible timing and a fair bit of luck. Stornoway chief executive Matt Manson spoke with the Financial Post’s Peter Koven about the company’s remarkable progress at its $775-million Renard project after it was left for dead by shareholders in 2008." Manson tells Stornoway's "fairy tale" rise to the big leagues of diamond mining.

CEO Matt Manson: "A In December 2008, we were a 5.5-cent stock. We brought out our first economic analysis of Renard in October 2008 and it was skinny. Our bacon was saved by Quebec’s super flow-through (share program). In the winter of 2009, it was the only money available to us. We went drilling with a $6-million budget and we had a big home run. We discovered the ore body is much bigger at depth than we expected. By the end of 2009, we tripled the size of the resource. So the mine was made from drilling in 2009 with Quebec’s super flow-through, which we had to get because it was the only capital that could keep us alive through the credit crisis. So that’s a fairy tale-type story."

On diamonds: "What I always say about diamonds is it’s a very unique business. We’re mining a product that people buy as a luxury product, but it’s a non-discretionary luxury product. It’s the one thing in our lives that everyone recognizes as the thing to buy to commemorate the most important emotional moments in your life. And if diamonds didn’t exist, we’d have to find something else that we all agreed is the cultural symbol that you put on your finger to declare your marital status. And I don’t see any indication that the cultural place of diamonds is being undermined."