Mugabe Under Fire Over 'Stolen' $13 Billion in Diamond Money 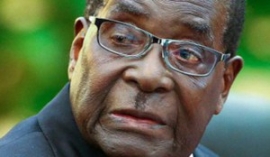 Zimbabwe president Robert Mugabe has been under fire ever since he justified last week the closure and nationalization of the country's diamond mines by claiming that the state has earned about $2 billion from the gems while about $15 billion was generated by the industry, thereby depriving the impoverished state $13 billion in direly needed revenue. The news media want to know why the government failed to act for years when now - after the fact - they claim to know that the companies had been siphoning off revenues for years. "If Mugabe and his government were sincere that such an amount of money had been looted, then they would have acted long back rather than first try to consolidate the nine companies into one and when that had failed, force them to shutdown. Mines and Mining Development minister Walter Chidakwa must explain why he wanted the nine companies to consolidate into one if they were stealing so much money from Zimbabweans."

The article goes on the state that, "The logical thing to do would have been to ensure that these companies were prosecuted and their operations shut. Mugabe’s statement had the effect of condemning the diamond mining companies in the court of public opinion and somehow absolving his government from the alleged looting." The opinion gaining traction in the country is that the government was at least complicit with the mining companies and at worst simply lining their own pockets. "This raises the spectre that, if indeed these companies had looted so much, they had the blessing and the protection of the government." Another opinion piece first imagines Zimbabwe is a country where the government is held accountable, "However, this is Zimbabwe ... As usual, the president did not take the responsibility for the chaos that was created by his government. It is inconceivable that all that money was spirited out of the diamond fields without the government’s knowledge. The government demonised Zimbabweans that called for greater transparency in diamond mining because it knew that it was hiding something and now the cat has been let out of the bag." It is now calling for him to resign.