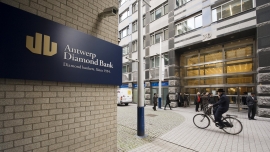 Two financial technology players are trying to entice the 1,700 Antwerp diamond companies to leave traditional banks behind and partner with them for making international payments. Some 200 diamantaires – Indian and Jewish traders alike – recently sat down together in the Antwerp Diamond Club for a seminar to introduce Uphold and FX4BIZ, two ‘fintech’ companies that would like to conduct the diamantaires’ international payments. Many small, mainly Belgian-Jewish diamantaires are frustrated ever since the closure of the Antwerp Diamond Bank (ADB) at the end of 2014, when parent group KBC absorbed ADB and started phasing out the remaining files. The ADB building, a reference point in the diamond district, is now for sale. AWDC, umbrella organization for the diamond industry that organized the seminar, has been searching for new players to fill the void ever since. Large sums of money are involved. Last year the Antwerp diamond trade was good for a total value of 44 billion euro ($48.3 billion).

Uphold is an Internet platform on which private individuals as well as companies may store, exchange and transfer their money to 190 countries. The American company claims to be cheaper and faster than a traditional bank. It is actually a sort of club. Sending money to other members is as good as free. But those that wish to send money to an account outside the Uphold ecosystem pays a 0.5 percent commission. “A fine concept, but its success depends entirely on how many diamantaires participate,” they say. One trader said that an external transfer of 100,000 euro ($110,000) using Uphold could cost $550, compared to only $110 to $165 at KBC or ABN AMRO. “As a result of the transparency of our rates, we are perhaps perceived as expensive, but in contrast to banks we have no hidden costs,” the Uphold team replied. “And above all: the more you and your business partners use our system, the cheaper it becomes.”

“Naturally," he continued, "the major players will have closed sweetheart deals with the banks. Therefore, we are targeting primarily the many smaller diamond traders,” said Robin O’Connell, director of business development at Uphold, in a conversation after the presentation in Antwerp. “Gaining trust will be crucial. This is a clearly defined, closed community.” Thirty diamond companies will test Uphold for a year during the pilot project. The platform, created by Internet pioneer Halsey Minor, was previously called Bitreserve, a reference to the virtual currency Bitcoin. It uses a version of blockchain, the technology behind Bitcoin. Uphold is setting up an office in Antwerp with six employees.

Belgian-French company FX4BIZ is the second company that introduced itself to the diamantaires. This company is also launching a year-long pilot project with thirty diamond companies. FX4BIZ is a payment service provider that offers companies a platform for the foreign exchange market, or Forex. “A specific service for diamantaires is a logical extension for us,” says financial director Patrick Mollard. “A major advantage for them is that our platform is also open outside office hours.” He points out the differences with Uphold. “Our rates are not based on membership, but on volume. The more transactions you carry out on our platform, the less it costs. Also, we do not hold any funds. For us it is purely a matter of quickly converting money into other currencies. We have no ambition to be a bank.”

Just as with Uphold, the diamantaires reacted with a mixture of interest and suspicion. A discussion was sparked off when FX4BIZ unveiled its prices and people started doing the math. The discussions had an immediate effect. Both companies decided after the seminar to lower their pricing. Both Fintech companies emphasize that they have the required licenses.