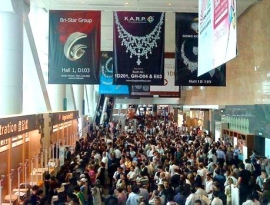 Diamond industry analyst Ehud Arye Laniado took the occasion of the international jewelry show in Hong Kong to ascertain the mood of the diamond market, specifically its reaction to the high levels of rough supply in early 2016 in light of demand for polished goods, and more specifically to guage the resulting profitablility. He wanted to find out whether "the recent rush to buy rough diamonds is justified, considering the polished demands seen at the show." While he does note that there was optimism about demand for polished, he writes that, "the most recent demands do not reflect a resurrection to a normal market," and "the recent improvement in demand, which may reflect only a restocking phase and not an improvement in consumer demand, should not be mistaken for a turnaround in the business," as the issues plaguing the industry (financing and excess capital, the lack of marketing and serving credit facilities rather than consumers) are all still present. What leads him to these conclusions?

There was a solid level of demands, writes Laniado, but mainly in a few specific areas, "mainly 0.60-carat rounds and smaller as well as 1 & 2 carats, in G colors and better, VS-SI clarities." Furthermore, "prices ... were fairly low." The key question, however, is "how profitable, if at all, were the recent transactions during the Hong Kong show?" To a great extent, "profitability is marginal." The cost of rough for smaller goods below a half-carat "is reasonable", and manufacturers can buy, polish and sell at a profit. "The next size up, 0.60-0.70 carats are marginally profitable despite also being in demand." Next, the 1 & 2 carat rounds "may be profitable" if purchased by an astute buyer on the primary market, as the rough to produce them was selling at a premium on the secondary market, while the 3+ carat goods were not profitable. Still, they were purchased, leading him to conclude that they were being bought "mainly to generate cash flow, not large profits." This turned out to be a theme: to turn a profit at the HK show, goods had to be bought "at exceptionally low prices in the first place."

Concerning talk of an industry turnaround, he writes, "The combination of reduced volume supply in the second half of 2015, coupled with the price reductions, may have started to prove effective as it was the goal of the exercise. At the same time, we can see that in order to generate transactions, prices of polished diamonds need to be lower than their 2014-2105 levels (due to high rough diamond prices), proving that demand exists, but at reduced prices. Low prices of polished diamonds require low rough prices as well. At this point in time, that would signal that further price softening is possibly called for. Considering this, does it warrant the appetite for rough that we have seen since the start of the year?" Laniado does not believe so, except in very specific cases.

"We are looking at a market in limbo. Some manufacturers may see some profit if they bought the right rough at a reasonable cost, with as little financing as possible. Those who bought rough at higher prices, purchased goods across the board (run of mine) or simply the wrong rough, will discover that it is not the way to generate a return on their capital. They will probably draw further on their credit and financing, finding it difficult to cover costs and therefore sell for less – only further exasperating the situation." In short, after De Beers sold in Jan. and Feb. a total of $1.155 billion in rough, and ALROSA nearly another $1 billion, "the total supply to the market seems greater than the retail market’s current needs - much higher in terms of volume and much more diverse in terms of the type of goods."