Mugabe: "The State Must Have A Monopoly" on Diamonds 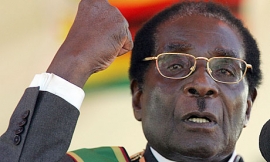 Saying that existing miners had robbed the country of its wealth, President of Zimbabwe Robert Mugabe on Thursday said that his government would take possession of all diamond operations. “The state will now own all the diamonds in the country,” Mugabe said during a two-hour interview with state broadcaster ZBC TV. “Companies that have been mining diamonds have robbed us of our wealth. That is why we have now said the state must have a monopoly.” Mugabe’s comments came a week after the ministry of mines ordered all mining companies to halt work and leave the Marange fields, saying they had not renewed their licences. At the time it denied it was seizing the mines. The largest diamond mine in Marange, Mbada Diamonds, on Monday sued the government at the High Court and was allowed to take control of its mining assets. "We have not received much from the diamond industry at all," he said.

It has been suggested that the move could affect relations between Harare and Beijing given that one of the affected companies (Anjin) was of the Chinese origin, but in his 92nd birthday interview with the Zimbabwe Broadcasting Corporation aired last night, President Mugabe said he told his Chinese counterpart President Xi Jinping during his State visit here last year that Government was not happy with Anjin's operations. "I don't think it has affected any of our relations at all. I told President Xi Jinping that we were not getting much from the company and we didn't like it anymore in this country," said President Mugabe. "After all," he continued, "the real kimberlite mining has not been done. It was all alluvial so far. Just doing the sands, the loose earth and the conglomerate of course, cutting stones through and getting whatever carats. That is what this Chinese company Anjin was doing."