Lucapa Sells Another $6.8 Million of Angola Diamonds at $5,075 per Carat 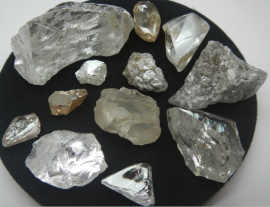 Lucapa Diamond Co. has announced the sale of another 1,349 carats of diamonds from the Lulo Diamond Project in Angola for $6.8 million (A$9.6 million). This follows the sale of the record-setting 404 carat diamond that sold for $16 million (A$22.5) just a few days ago. The latest sale brings the total number of carats sold in the March 2016 quarter to 1,931, earning the company gross revenues of $23.5 million (A$32.5 million). The 1,349 carats sold at an average price of $5,075 (A$7,126) per carat, "providing further evidence of the strong market demand for large high-quality diamonds like those being recovered from alluvial Mining Blocks 6 and 8 at Lulo." Thus far, the Lulo partners have sold 12,125 carats of alluvial diamonds from the project for total gross revenues of $38.2 million (A$$51.3 million), representing an overall selling price of $3,147 per carat to date. “The sale prices achieved in the March quarter continue to highlight the diamonds we are mining at Lulo are, on average, among the best quality gems in the world,” said Lucapa CEO Stephen Wetherall.