Diamond Ring For Single Ladies: Start of a Trend? 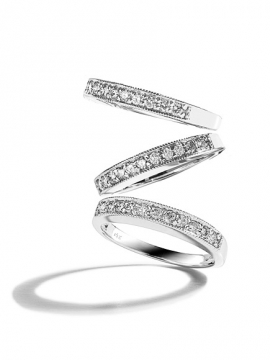 Jewelry designer Ruta Fox has created a symbolic diamond ring for single ladies, and the women who have bought it express that it's a liberating feeling wearing it, writes People magazine. The "Ah Ring" is a 14-karat white band that includes eleven full-cut diamonds. It is meant to be worn on the pinky finger, and the "Ah" stands for two things: available and happiness. "Single is the new lifestyle. It's becoming more and more prevalent - there's definitely a trend that more people are living single for a longer time," the South Carolina designer said. "I figured, ‘Why wait for a man to buy you diamonds?’ Married and engaged women have their rings. There was nothing on the market for single women to buy for themselves. So I created one. It serves as permission, she adds, for many young women to buy themselves a nice piece of jewelry, honoring their success in the moment.

"I have tons of notes from women. They tell me that their ring actually meant something. It was very special to them, it resonated with them. Women were deeply attached to the feeling, the emotional part of it. My pinky ring – it's a celebration of being single," she says. That sort of solidarity continues to resonate with today's 20-somethings, a new generation of women continuing their educations and getting settled into their careers. "I think that ring has kind of become an inspiration for a lot of women who are choosing to get married later, it's become their symbol," says Sherri Langburt, CEO of an influencer marketing agency in New York City who is a fan of Fox's story.