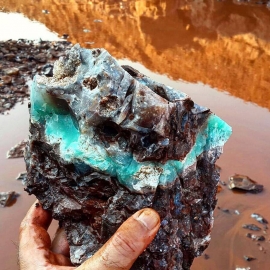 Rob Bates of JCK tells the story behind gem explorer Yianni Melas' discovery of a new blue-green gemstone, baptized Aquaprase. "Two years ago," writes Bates, "veteran gem explorer Yianni Melas was doing some work at an African location - he doesn’t want to say where, so the area is not overrun. Geologists had dismissed the locale, convinced it held only some few stray opals. Locals didn’t think much of it either, but when Melas went to a friend’s hut, he saw an interesting specimen on a shelf that looked like he nothing he had ever seen before." “I knew it was something unusual,” said Malas, “I couldn’t explain why I thought it was different,” he adds. “It is like a third eye. I have seen thousands of stones and you get that feeling. When I picked up the stone, I had the chills, a funny feeling. That feeling is something you have to follow.”

Bates goes on to tell of Malas' digging up the stone and sending it to a reputable gem lab, which eventually determined it was a variety of an existing gemstone, and then to the GIA, which after months of examination finally phoned Malas to tell him, "It’s a chalcedony that has never been discovered.” As the discoverer, Malas had naming rights, and decided on aquaprase - "aqua for the blue sea, which the stone evokes; prase for the green." Malas is now in the process of marketing the stone, and wishes to retain its natural beauty. “This gem is almost like a savior,” says Melas. “It is coming at a time when the industry needs some romance. There are so many articles about treated this and treated this. I consider this finding a blessing for the industry.”