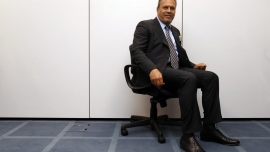 The former top Belgian-Israeli diamond dealer and former De Beers sightholder, Erez Daleyot, who cleared out his Antwerp business leaving behind debts totalling nearly $230 million (€208 million), has thus far eluded his creditors by allegedly hiding out in Israel or South Africa - where he also used to run one of the largest diamond factories, reports Belgian daily De Tijd. Last week, the Antwerp Court of Appeals finally put the case to rest, declaring his former company D.D. Manufacturing bankrupt and rejecting the company's appeals for a legal restructuring, which it viewed as merely a ploy to interfere with the rightful course of justice. "The intention of the Act on the continuity of enterprises cannot be to protect debtors from a declaration of bankruptcy ad nauseum," the court ruled. The court has now assigned an examining magistrate to investigate a possible criminal prosecution.

The liquidators of Daleyot's diamond firm have determined that the declaration of bankruptcy leaves several creditors, collectively owed nearly $230 million, empty-handed. Three banks - KBC Bank ($66 million via KBC's former subsidiary, Antwerp Diamond Bank), ABN AMRO ($34.6 million) and the Belgian branch of ICICI Bank UK ($32 million) - have lost a total of $132.6 million. The largest non-bank creditor is Daleyot's former American business partner Lazare Kaplan, claiming another $66 million. This is not to mention the tax authorities, social security, fellow jewelers, real estate agents, accountants, etc. On top of the $230 million of company debt, there are also attachments on Daleyot himself by the tax authorities ($32 million) as well as KBC and ABN AMRO ($33 million each). Meanwhile, the court has determined that Daleyot cleared out the company's diamond assets as well as some $33 million in cash from his firm while on the run, but are dumbfounded as to how he managed to do this.