Gemfields' First Half Profits Fall 65% on 9% Decrease in Revenue 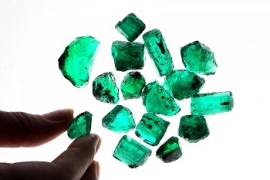 Emerald and ruby miner Gemfields has released its results for H1 2015 that ended December 31, reporting revenue dropped 9.1% to $94 million comparted to the first half in 2014. Profit after tax fell 65% to $8.2 million, compared to $23.2 million a year previously. Emerald and beryl production from the Kagem mine in Zambia surged 30% to 15.7 million carats, while production of ruby and corundum from the Montepuez mine in Mozambique fell 67% to 2.1 million carats. The company held three auctions during the period, consisting of two rough emerald and beryl auctions (1 high quality, 1 low quality compared to 2014) and one rough ruby and corundum auction (higher and medium quality compared to 2014). Gemfields plans to hold two further auctions of rough emerald and beryl during the second half of the financial year 2016 with the next auction of predominantly higher quality rough emeralds expected to take place in March 2016.

The statement says that the colored gemstone market continued to expand in the second half of calendar year 2015, and its wholly-owned Fabergé Ltd saw the value of realised sales during the period increase by 70% when compared with the same period in 2014. The company retains its production forecast of 25 to 30 million carats for rough emerald and beryl, and 8 million carats of ruby and corundum for the 2016 financial year. Gemfields' chairman Graham Mascall: "Significantly the auction results, in conjunction with global demand for coloured gemstones, have clearly demonstrated that prices have remained firm as demand continues to grow. This stability within the coloured gemstone sector is perhaps even more significant when one considers the well-publicised challenges being experienced within the diamond and broader extractive sectors."