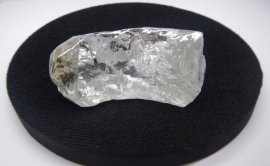 After a week of speculation and a temporary suspension of trading in the company's securities, Lucapa Diamond Company announced the discovery of the biggest recorded diamond in Angola, confirmed as a Type IIa D-color gem-quality stone. The 404-carat diamond from the Perth-based company’s Lulo project is also the 27th biggest recorded diamond in the world and the biggest diamond ever discovered by an Australian company. Lucapa has not yet valued the diamond, but recent sales of large special diamonds suggest it could be worth more than $20 million. The gem was recovered from alluvial mining at the company’s mining block 8, where it has already recovered 60 large special diamonds since mining commenced in August last year. The previous record for Angola’s biggest diamond is a diamond called “Angolan Star”, a 217.4-carat gem recovered from the Luarica mine in 2007.

Lucapa Diamond Company chief executive Stephen Wetherall said “We have always emphasised the very special nature of the Lulo diamond field and this recovery - together with the other 100 carat-plus diamonds recovered this year alone - is further evidence of that. And while we continue mining these exceptional alluvial gems from mining blocks 6 and 8 at Lulo, we are also continuing to advance our systematic exploration program to find the kimberlite source of these diamonds.” The Lulo project is a partnership with Endiama and Rosas & Pétalas. Lucapa shares jumped 32.81% to 42.5 cents shortly before the close of trade after emerging from a trading halt this morning.