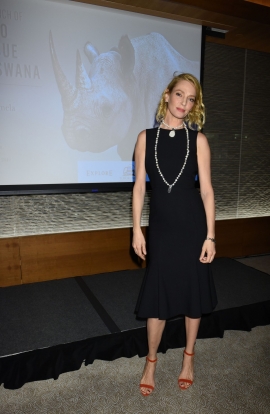 De Beers subsidiairy Forevermark hosted a Botswana Rhino Rescue Fundraiser, attended by high dignitaries and Hollywood actress Uma Thurman, in support of the Tlhokomela Trust, a newly established organisation preserving wildlife in the Jwana and Orapa game parks, close to Debswana’s major diamond mines in the central towns of Jwaneng and Orapa. De Beers has been involved in projects regarding the conservation of natural resources in Botswana since the 1970s. For every acre of land used for mining by De Beers, five acres are dedicated to the conservation of nature. In the past two years, the Botswana’s Department of Wildlife (DWNP) and private conservation groups have successfully reintroduced imported black and white rhino populations into the wilds of the Okavango Delta after they were declared locally extinct in 1992.