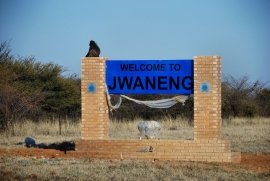 According to statistics published by the Bank of Botswana on Feb. 11, the value of exports from the major diamond mines in Botswana fell 38% to a seven-year low of $2.4 billion (P28.5 billion) in 2015 from $3.9 billion (P45.6 billion) the previous year. The figures however do not include diamonds that De Beers brings in the country for aggregation before re-exportation. Botswana diamond exports were last recorded lower during the 2009 global financial crisis when the country’s mines exported $1.8 billion worth of stones. The slowdown in exports has also seen government mineral revenues falling 15% in 2015 while economic growth forecast were also slashed to one percent from 3.2 percent.

“The continued slowdown of growth in the global economy, particularly in the major markets for our diamonds, has had profound impact on the domestic economy,” the Minister of finance and development planning, Kenneth Matambo said last week in his 2016 budget speech. The decline in exports mirrors a 16% drop in production at Debswana where 20.4 million carats were dug up in 2015 from 23.3 million carats the previous year." Analysts at Econsult say despite the immediate economic outlook remaining poor there is, however, some room for optimism. “There are signs that the global diamond market is beginning to stabilise, and that measures undertaken by De Beers and others to reduce supply and prices of rough diamonds are beginning to take effect." However, for 2016, Debswana has again reduced production targets to 20 million carats, but if the market stabilises there is a good chance that production will not have to be reduced further. “As long as there is no major disruption from regional or global events, 2016 should mark the turning point with the prospect of improved economic conditions ahead,” added the Econsult report.