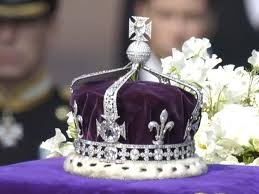 News outlets in Pakistan are reporting that after some 800 letters from lawyer Javed Iqbal Jaffery and a rejected petition last December, the Lahore High Court (LHC) accepted on Monday a petition calling for the British Queen to hand over the famous 105-carat Koh-i-Noor diamond to Pakistan. Jaffery argued in his petition that the Koh-i-Noor actually belongs to Pakistan as the gem hailed from the territory that became Pakistan in the aftermath of the historic partition of the subcontinent in 1947. The giant diamond was acquired by Britain in 1849 when the East India Company annexed the region of Punjab. Since then, India has laid claims to the diamond, urging the British government to return the gem which currently stays on display in the Tower of London. The jewel, once the largest known diamond in the world, is set in a crown last worn by the late Queen Mother during her coronation and was displayed on top of her crown when her coffin lay in state after her death in 2002.

Jaffry has named the Queen and the British High Commission in Islamabad as respondents in his case which had previously been rejected by the LHC registrar in December on the grounds of paperwork, but has now been accepted by a judge of the same court. Further, the lawsuit is aimed at forcing Prime Minister Nawaz Sharif’s government to press Britain for the diamond’s return. Britain has consistently rejected Indian claims on the gem and there is no suggestion it would look on the bid from Pakistan more favourably.