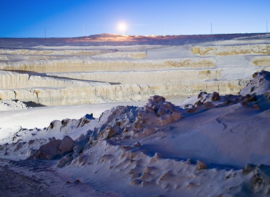 De Beers has ceased exploration of the Tango extension near the Victor diamond mine due to local pushback, writes CBC News. The Victor mine is located in the James Bay lowlands of northern Ontario, and is the province's only diamond mine. DeBeers is hoping to extend mining operations into a nearby deposit called Tango, but first needs to determine it's feasibility. The company said the exploration is required as the Victor mine enters its final years. Tom Ormsby, a spokesman for De Beers Canada, said the company has halted its plan to take a bulk sample of the new mining grounds. The work will be delayed until next winter if it doesn't get done soon, Ormsby said, adding this "last batch of exploration" requires 100 days while the muskeg is frozen to do the work necessary. The extra costs of a potential pushback of mine operations will have to be taken into account when deciding how to move forward, Ormsby added.

The Attawapiskat First Nation is divided in support of the project, which is located on traditional land in northern Ontario roughly 90 kilometres west of the community. Last month, a sacred fire was lit on the winter ice road by protestors to voice concerns about economic and environmental issues associated with the mining project. Mushkegowuk Grand Chief Jonathan Solomon said that the community and the company have learned from the Victor mine that there is a better way to conduct business. "It is unfair for De Beers Canada to tell the community it's either a yes or a no ... or no Tango," he wrote. "The ultimatum has created division and animosity in the community and the region, too." Soloman indicated Tango could be an opportunity for reconciliation with the mining company. "Investment is good — if it produces good results for all of us," he added.