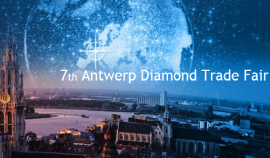 The seventh edition of the Antwerp Diamond Trade Fair (ADTF) ended on Tuesday, with many exhibitors saying the show was quiet this year, reflecting the state of the diamond and jewelry industry worldwide.
The show again took place in the trading halls of three of the city's diamond exchanges – the Antwerp Diamond Bourse, the Diamond Club of Antwerp and the Antwerp Diamond Kring.
Organizers said that hundreds of invited international jewelry manufacturers, retailers, designers and others participated in the show which opened on January 31 and ended on February 2, with around 75 Antwerp diamond firms exhibiting.
"We felt the show was quieter than last year, there is no doubt about that," said Suraj Poddar of Uniglo Bvba. "Nonetheless, we did meet people and we will be following up on those contacts. The success of a show is not always in the number of transactions you carry out but the business that is done afterwards. That is especially the case these days when buyers are looking for specific goods. Most people are not buying for stock, but looking to see who can supply them with precise items as quickly and reliably as possible and often contact you at a later date having seen your diamonds on display," he added.
Meanwhile, another exhibitor, who preferred to remain anonymous, said his firm would have to consider deeply future participation. "I am not certain that this is the right format," he commented. "It's true that it is a convenient show because you bring your stock down from the office and put it on display in the booth in the trading hall which means it is secure. In addition, you don't have the usual show expenses of shipping, insurance, staff time and travel. But the cost of the booth is high and there and not enough buyers or a wide enough range. These issues need to be addressed," he concluded.
As in previous years, there were breakfast seminars, with the topics this year being lab-grown diamonds and an exploration of what is meant by the term luxury.
In the first seminar, on February 1, Jean-Mathieu Mangnay of the IGI spoke about the current developments in lab-grown diamonds. He said that CVD diamonds and the latest HPHT man-made diamonds are much more difficult to identify since even experienced diamantaires looking at colorless or near-colorless diamonds have almost no way of determining whether they are looking at a natural or man-made diamond.
He explained that since 2014, the main topic of discussion in all the diamond centers has been the undisclosed mixing of small synthetic stones into parcels of natural diamonds. "At most of our worldwide labs we have seen a slow but steady increase in the submissions of small sizes (down to 1 point). Although the total numbers are not alarming, the pace of growth of these submissions has been picking up."
The second seminar, held on February 2, was entitled 'What is luxury?' and was presented by experienced industry journalist Didier Brodbeck. He gave an exhaustive review of the nature of luxury and what constitutes luxury items in the eyes of consumers.