Stornoway's Renard Diamond Mine Ahead of Schedule, Under Cost 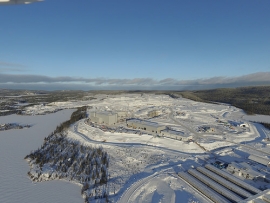 Canadian diamond miner Stornoway today announced a revised construction schedule for the Renard Diamond Project with an associated reduction in the forecast cost to complete. Re-baselining of the project’s schedule and capital cost forecasts has been made possible following several months of construction progress achieved consistently ahead of plan, and has been undertaken as part of the revised mine planning for Renard which is expected to be completed in the second quarter of this year. First ore delivery to the Renard diamond process plant has now been scheduled for the end of September 2016, with commercial production (60% of plant capacity achieved over 30 days) to be achieved by December 31, 2016. This is a 5 month improvement on the previous schedule, which assumed commercial production in the second quarter of 2017.

The estimated capital cost to complete for the project has been adjusted downwards from C$811.0 million to C$775.4 million, reflecting savings in general and administrative expenses and capitalized operating expenses. The new cost forecast includes all contingencies, escalation allowances, and working capital up to the date of commercial production. Matt Manson, President and CEO, commented “This improvement in our development schedule at Renard has been made possible by the excellent construction environment we are enjoying in Québec and the efficient progress made by our team. The reduced cost to complete adds further strength to our balance sheet." The Renard Diamond Project is located in the James Bay region of north-central Québec. Construction commenced on July 10th, 2014. First ore is scheduled to be delivered to the plant at the end of September 2016, with commercial production scheduled for December 31, 2016.