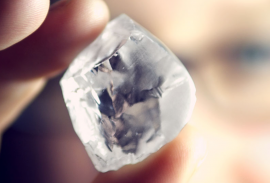 Gem Diamonds Ltd said there had been a strong end to the year at its Letšeng mine in Lesotho with full-year production above guidance and "robust" prices. Its diamonds achieved an average price per carat of $2,117 in the fourth quarter, however the average price last year was 9 percent lower than that for 2014. The miner reported that it produced 29,400 carats during the quarter, with full-year output totaling 108,579 carats. It added that it sold nine rough stones with a value of more than $1 million each and three diamonds each weighing more than 100 carats. Gem Diamonds said that it has reduced production at its Ghaghoo operation in Botswana in order to curtail expenditure.