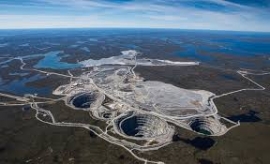 The Mackenzie Valley Environmental Impact Review Board (“MVEIRB”) has completed its Report of Environmental Assessment for Dominion Diamond's Jay Project in the Northwest Territories and has recommended that it be approved, subject to the measures described in the Report. The Jay Project is an expansion of the Ekati Diamond Mine. The Report has been sent to the Minister of Lands, the Honourable Robert C. McLeod. Developing the Jay Pipe is anticipated to extend the life of the mine approximately 11 years beyond the current projected closure of the Ekati Diamond Mine in calendar year 2020. This will require construction of a water retention dike encircling the pipe, allowing the isolated area to be dewatered ahead of the start of pre-stripping and mining operations. When Dominion Diamond purchased the Ekati Diamond Mine in the NWT in 2013, it was scheduled to close in six years when existing resources were depleted.

Northwest Territories writes that, "The Ekati Mine employs approximately 1,400 people, including 600 contractors, of which one-third are Aboriginal and over half are northern Northern residents. It is the largest Northern employer of Aboriginal people in the mining industry. Closure of the mine would result in a significant impact on employment in the Northwest Territories; the Jay Project will extend this employment by over a decade." Public hearings about the project focused on environmental concerns, including the declining population of a caribou herd.