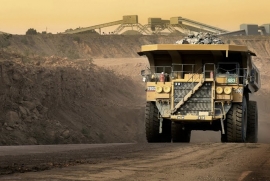 Rough diamond analyst Paul Zimnisky takes a comprehensive look at the current and projected output for the entirety of the diamond mining industry, concluding that "2016 global diamond production by-volume is forecast to be 137 million (M) carats, or +1.3% over 2015 estimates," despite efforts by De Beers and Rio Tinto to limit global diamond supply. Stable Russian production, new mines, and production increases by Dominion Diamond Corp and Petra Diamonds in particular, he writes, will serve to offset these efforts. "However," he adds, "the impact of strategic production cuts are more apparent on a value-produced basis, as curtailments at De Beers' high-value mines in particular, and lower diamond price offerings across the industry, reduce global diamond production by-value forecasts to $12.6 billion in 2016, or -10.0% relative to 2015 estimates."

"Industry leader De Beers, representing >30% of global marketshare, cut total production by approximately 7% in 2015 to 29M carats. De Beers is targeting 26-28M carats in 2016, compared to 29M in 2015" In Russia, ALROSA "actually increased production in 2015 to 38M carats, +6% YoY. Instead of reducing production, ALROSA instead held back supply by only selling 78% of 2015 production." The company, "has indicated that they do not plan to reduce production unless market conditions get substantially worse. The company is targeting production growth going forward, with average production of ~40M carats annually over the next 10 years." Meanwhile, LUKoil sold 2.3M carats in 2015 from its Grib mine, which commenced production in June 2014. With a reserve of 75M carats and full production ramping up to 4.5M carats annually, starting in 2016, the life of mine is 15-17 years."

"Rio Tinto's Rio Argyle mine in Australia, the world’s largest diamond mine by production volume, realized a >45% YoY production increase in 2015 after completion of a multi-year underground mine development project. Argyle produced 13.5M carats in 2015 versus 9.2M carats in 2014, and together with the Diavik Mine in Canada, the company is targeting 21M carats in 2016. Dominion Diamond is Rio’s 40/60 partner in the Diavik mine which has 4 pipes, 3 of which are in operation. The 4th pipe, A-21, has 10M carat reserve and is being developed for $400M, with first production slated for late 2018. In 2015, Diavik produced 6.4M carats, which was down 11.5% YoY. Dominion’s ~89% owned Ekati mine produced an estimated 3.0 million carats in 2015, a 6.3% decrease over 2014, as the company focused on the Misery Main pipe - a 14M carat reserve with first production expected in 1H 2016. Estimated to contribute 4M carats this year, it would substantially increase the mine’s production by 70% to an estimated 5.1M carats in 2016. Looking further ahead, Ekati’s Jay pipe, which is an 85M carat reserve, currently in feasibility study stage, would come online in 2020. In 2015, Petra Diamonds produced 3.2M carats, plans to ramp-up company-wide production to 5 million carats by FY 2019."

"The Marange fields in Zimbabwe were at one point one of the largest commercial alluvial diamond mining operations in the world, peaking with production of approximately 12 million carats in 2012. However, production has rapidly fallen since as most of the easily minable gravel has been depleted. Production in 2015 was an estimated 4.5 to 5 million carats, with production estimated to further contract in 2016 as the operators have yet to commit the capital necessary maintain output levels of previous years. The Democratic Republic of Congo continues to represent the world’s largest source of artisanal diamond production by volume, representing an estimated >5% of global output, however the diamonds continue to be the lowest valued in the world at <$10/ct. Angola remains the second largest source of artisanal production representing 2-4% of global output by volume, but at a much higher average price-per-carat than the DRC at >$100/ct.

In Canada, Gahcho Kué (51% De Beers/49% Mountain Province Diamonds), the world’s largest new diamond mine, is on pace to commence production in Q3 2016. Stornoway’s wholly owned Renard project is ahead of schedule with commissioning on pace to begin in the second half of 2016, with commercial production set for Q2 2017. Production at Firestone Diamond’s Liqhobong mine is expected in Q4 2016, its production is estimated to reach 1M carats a year. Other new mines of note expected to start production in the coming year or two include Kimberley Diamonds’ Lerala mine and DiamondCorp’s Lace mine. In 2015, Paragon Diamonds was seeking financing to bring it’s Lemphane project in Lesotho into production, but this has been delayed.