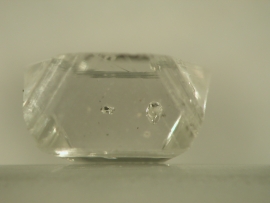 In a contribution on the Fancy Color Research Foundation (FCRF) website, Chief Scientist of the Diamond Durability Laboratory, Daniel Howell brings a widespread misconception to the attention on what many assume to be bubbles of air or gas trapped inside rough diamonds. The misconception has led some manufacturers to drill release channels, fearing the trapped gas may cause the rough diamond to explode during polishing. However, Howell writes, the extreme pressures and temperatures under which a rough diamond is formed simply eliminate the concept of any form of gas to be trapped inside rough diamonds, what looks like a bubble, is actually an inclusion of other minerals.

That, Howell says, is a scientific fact backed by extensive research, in which, contrary to traditional manufacturing where a polisher will try to maximize the yield with the least inclusions possible, scientists will carefully polish away everything but the inclusion, attempting to keep them intact and study them more adequately. For Howell, who has been studying rough diamonds for the past 12 years, this type of research is vital to provide insight in the environment in which diamonds are formed which can lead to more efficient exploration. By studying inclusions, research has also demonstrated that some of the oldest diamonds ever found date back over 3 billion years, adding to the appeal of natural diamonds as nature's most precious and valuable treasure.