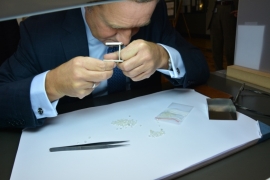 The Antwerp Rough Diamond Bourse - Antwerpsche Diamantkring (ADK) - is set to host the first auction ever to take place in an Antwerp diamond exchange, writes IDEX Online. The annoucement comes after the ADK signed a five-year agreement with recently launched Antwerp-based diamond selling channel DAuction House. ADK president Freddy Inzlicht said that DAuction House represented a new out-of-the-box initiative, which created a new way to market diamonds. “As the leading city of the world diamond trade, DAuction House could turn into a world leading auctioneer holding its diamond sales in the heart of the Antwerp diamond district,” said Inzlicht.

According to IDEX, DAuction House manager Erez Rivlin said that auctions protected the buyer, as opposed to the tender system that tends to favor the vendor. He said that in his experience, buyers at tenders have offered 20-30 percent more than the next highest competing offer – whereas in this auction, the increments will be around 2 percent. DAuction House is offering approximately $25 million of polished diamonds at its auction on February 3. More than half of the goods are fancy colors, with more than 30 stones weighing in excess of 10 carats.