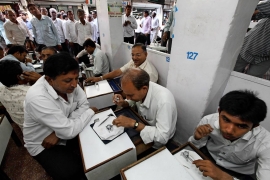 The Financieele Dagblad (Netherlands) takes a look at the level of transparency in the small and middle-sized diamond trade in Surat, India, concluding that traders on the local market still turn a blind eye to demands for official invoicing. The little paper envelopes with scribbled details of the contents and price – so familiar in the diamond trade – are the only paperwork to be found at the dusty street-side Hira Bazar (diamond market) in Surat. “This is how we do business worth millions of rupees,” says local dealer Prakash Kathri. Prices are negotiated through a few quick taps on a calculator, agreed with a nod of the head. Few questions are asked. Certainly, there is no discussion about the stones' provenance. Asked whether traders have to present official invoices to the government or tax authorities, Kathri smiles: “Only the big companies do that. Our business is based on trust.”

Given that nearly 90% of all diamonds are polished in India, there is a good chance that the stones on one’s diamond ring have visited this market in Surat. Some of the manufacturing factories are owned by multinationals that import their rough diamonds directly from major miners, but most are small or mid-sized, with fewer than 500 workers, and supply the local informal market. Dinesh Navadiya of the Surat Diamond Association says that the informal trade must end, and in 2015 the association introduced an official invoice complete with a government tax stamp. While Navadiya praises the mutual trust among traders, he admits there are occasional defaults and illegal undisclosed mixing of natural and synthetic diamonds. The FD found no evidence of any invoices at the market, but Navadiya expects that, “most people will be using them within a year.”

Navadiya also does not believe that current trade practices in Surat benefit smugglers, and affirms that imports must have a Kimberley Process Certificate, but once on the informal market, most traders have no idea from where their goods originate. So how is one to know where they come from? “Trust,” says Navadiya. But trust is not enough at the international level. As India moves forward to become a more significant international trade center, it will have to increase transparency. Russell Mehta, president of multinational Rosy Blue and vice-chair of the Gems and Jewellery Export Promotion Council, is a strong defender of “as much transparency as possible. When things like conflict diamonds and synthetic diamonds are involved, there must be paperwork.” He notes that, “The retail sector is demanding more and more guarantees from us. So the organized diamond traders are going to have to start demanding them from the small players in Surat, so eventually it will change.”