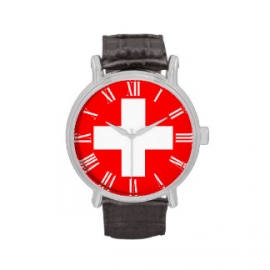 Bloomberg Business reports that Swiss watch exports posted their first annual drop in six years, hurt by slumping demand for less expensive timepieces that are competing for buyers with Apple Inc. and other smartwatch makers. December exports declined 3.8%, pushing shipments down 3.3% on the year to 21.5 billion Swiss francs ($21.2 billion), the Federation of the Swiss Watch Industry said Tuesday. That compares with a 1.9% rise the previous year. Timepieces costing $197 (CHF 200) to $490 (CHF 500) - which comprise about 15% of volumes - suffered the most last month, slumping 15%. “The 200-franc to 500-franc price segment has always faced a lot of competition, like from fashion brands,” said Patrik Schwendimann, an analyst at Zuercher Kantonalbank in Zurich. “Those watches probably had even more to fight with last year with the rise of the smartwatches.”

Meanwhile, Rapaport News, which generally focuses on statistics, attributes declining shipments to Hong Kong, the nation’s largest trade partner for the industry, as a major factor in the downturn. They write that, "Exports to Hong Kong slumped 21% to $244 million, mirroring disappointing sales in the location among jewelry and watch retailers. Exports to the U.S. fell 5.5% to $158.9 million. However, there were increased shipments to the U.K. (+26%), the United Arab Emirates (+9.6%), Singapore (+8.6%) and China (+5.5%)."