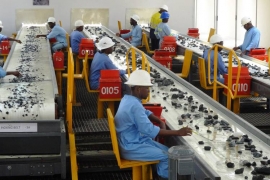 The Wall Street Journal writes that Gemfields PLC - a London-based company with the world’s largest emerald mine near Zambia’s border with the DRC - is "hoping to generate diamond-caliber demand for its emeralds and rubies." The Zambian operation has helped the company dominate a fast-growing and increasingly lucrative sector. Gemfields owns 75% of the Kagem mine, with the Zambian government owning the remainder. Gemfields has tripled production at Kagem since 2008 by hiring geologists to pinpoint the best areas to mine and by bringing in heavy machinery and trucks, as well as workers, to more efficiently transport and process the ore. Moreover, by using savvy marketing techniques that evoke De Beers’s strategy for stoking diamond demand in the 1940s and 50s, Gemfields has helped drive up emerald prices nearly 14-fold since 2009, according to sales data provided by the company.

U.N. statistics show the global trade in emeralds, rubies and sapphires has doubled since 2011 to nearly $5 billion a year and continues to accelerate. And Gemfields has no competition near its scale. “For the last year, growth has been much stronger in colored gemstones than in diamonds,” said Daniel Struyf, international jewelry director at Bonhams. “When I look at our 2015 top-10 list, it’s all about color.” Steady supply has helped foster demand, pushing Gemfields’ prices of high-quality, rough emeralds from the Kagem mine to about $60 a carat in 2015, from $4.40 a carat in 2009. Still, all is not rosy. The trade is notably 'rough-and-tumble', with rampant smuggling and illegal supply routes. Furthermore, there is little assurance that the colored-gemstone market will remain buoyant as it faces the same downturn in emerging-market demand for luxury goods as the diamond industry. Gemfields Chief Executive Ian Harebottle also recognizes the risks in expanding from such a small demand base. “Is there a risk of flooding the market?” Arun Jain, partner at gemstone polisher Gemdiam believes there is.