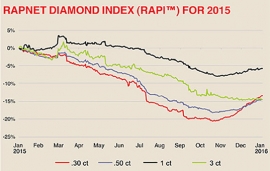 "Diamond sector profitability came under the spotlight in 2015 due to sluggish consumer demand in emerging markets and high rough prices relative to the resulting polished", writes Avi Krawitz for Rapaport Magazine. "Consequently, the year was one the industry would rather forget as it was characterized by excess supply and consolidation. Polished prices fell as manufacturers held large quantities of diamonds that were difficult to sell. There were simply too many diamonds available for too few buyers. While shortages helped elevate prices in the fourth quarter, caution lingered as jewelry sales stagnated in key emerging markets throughout 2015.

At the end of 2015, manufacturers were preparing to gradually increase their polished production in order to fill the shortages in the market. However, they remained conservative in their operations. While there was more optimism over the holiday season, dealers acknowledged that profitability was still a challenge, regardless of the prospective January rough price correction. They also recognized an urgent need to boost consumer demand. Most in the trade recognized that the industry needs to be proactive to reverse the downtrend ... After all, 2015 was the fourth consecutive year of annual polished price declines," Krawitz concludes.