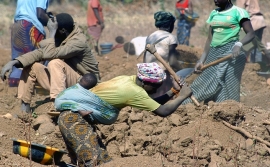 A government decision to consolidate diamond mining companies into the Zimbabwe Consolidated Diamond Corporation (ZCDC) is unlikely to create transparency and accountability in the sector, especially given that the same old players will remain integral to the new corporation, analysts have warned. Government, perturbed by alleged pillaging of alluvial diamonds and unaccountability by mining companies in the extraction of the gemstones in Chiadzwa - a vast diamond mining field allocated to companies linked to the security services sector, the Chinese military and political cronies - announced last year that it would force all diamond mines into ZCDC. Nevertheless, the Financial Gazette reported last week that a company linked to Russians and the ruling party ZANU-PF had been exempted from the planned merger. And considering that the diamond companies are already under government control through the ZMDC, analysts say the consolidation would likely change nothing

The consolidation, according to Minister of Mines and Mining Development, Walter Chidhakwa, is meant to foster transparency and accountability among Chiadzwa diamond mining companies which had failed to remit any proceeds to government coffers despite reports of massive earnings from diamond sales. He insisted that the move would curb revenue leakages at diamond mines and increase efficiency in the sector. Yet even in those companies government held controlling stakes, it had equally failed to create transparency and accountability, analysts claim. Transparency aside, perhaps the larger issue is that Zimbabwe's alluvial diamonds are nearly exhausted and no one has the knowledge or money to invest in exploration for diamondiferous kimberlites. Economic consultant, John Robertson, said there were very little prospects of success for the consolidated diamond entity. A geologist and former manager at Murowa diamonds - which did invest while under majority ownership of Rio Tinto before they pulled out - said, "It is clear that government and its existing partners have no capacity to conduct deep mining and the formation of the ZCDC is a ploy to award new concessions for alluvial diamond mining to cronies."