Tackling The Diamond Industry Crisis: Back To The Roots 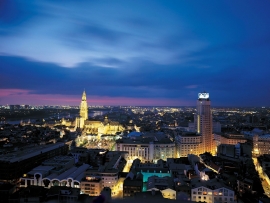 Bart De Hantsetters, President of the Belgian Diamond Manufacturers Association looks back at a difficult year for the global diamond industry and shares his views on how Antwerp should tackle the current crisis.

The year 2015, a year that will be recorded in history as an annus horribilis for our industry, is drawing to an end. If 2014 was a difficult year for the global diamond industry, then the past twelve months, no need to sugarcoat it, were utterly dramatic. Our industry is experiencing what they call “a perfect storm”, or in other words, an exceptional combination of elements that have seriously aggravated an already dire situation.

The list is nearly endless; high rough prices and disproportionally low polished prices have been suffocating the midstream profit margins for months. The harsh reality of demand slowdown has wiped out overly optimistic expectations on demand growth, especially in China where intensified controls on financial transactions combined with an economic plunge have severely impacted demand. From a more broad perspective, the competition to win over the hearts of our consumers has become increasingly difficult. The formation of the Diamond Producers Association, by the top miners in our business, is undoubtedly a positive initiative, but the group hasn’t even started yet and remains a paper promise to date. At the same time, access to financing, with the Antwerp Diamond Bank definitively closing its doors and other major players pulling out of the industry, has shrunk even further. Today, we are also still struggling with the fact that banks remain unwilling to open up something as simple as a bank account for some diamond companies.

On top of all these things, there are a number of issues that are seriously damaging the industry’s credibility and the confidence people have in our business. There’s the problem of undisclosed mixing of synthetics, manipulation of polished diamonds’ value through temporary or permanent treatments and fraudulent upscaling of certificates. There is also a clear lack of a broad consensus on grading standards for polished diamonds, and a pressing absence of a level playing field from a fiscal, ethical and compliance perspective.

While the latest De Beers Sight marked an historical all-time low in the amount of goods on sale, auction houses around the globe kept announcing dazzling record prices for the rarest of color stones. More recently, De Beers stated that for the first time in history, it would defer purchases from its rough supplier Debswana in Botswana, very much like the massive increase in deferrals from sightholders in the past few months. More than anything, these facts are symptomatic for the immense strain on our industry.

Who Is To Blame

In a recent open letter, Martin Rapaport, leading the trading and news platform that goes by the same name, called upon the industry to demand the resignation of De Beers front man Mellier. Rapaport believes that De Beers, with Mellier at the helm, is partly responsible for the current crisis. The letter says that by pushing rough prices up continuously, De Beers and Mellier only cared about their own profit margins, at the expense of the wellbeing of the entire industry.

Rapaport, who has been often criticized for the powerful position he holds through the Rapaport price list for polished diamonds, in his letter also refers to the ambiguous role of the banks in what he calls the “Rough bubble”.

Miners and bankers together created a situation in which banks provided more and more credit – no questions asked – to customers that bought more and more rough at continuously increased prices, which only benefitted the big mining companies. After all the latter, Rapaport says, are under increasing strain to keep their shareholders happy at a time when the global commodities market has plunged and other resource revenues are dwindling.

The result is a downward spiral of a growing, accumulated debt, especially in those places where credit was extended easily. The resulting debt can’t and won’t ever be repaid, because of an oversupply of polished goods in the pipeline and because of profit margins that are virtually non-existent. Otherwise put, the diamond trade turned into a financial bubble; rough diamonds were purchased to gain access to bank money, which was subsequently invested in all kinds of things other than diamonds. Obviously, the consequences of this bubble go beyond impacting merely those who played the game, also bona fide companies are feeling the effects today. Since the financial crisis, less and less banks have been willing to finance our industry and regulation and compliance rules have tightened even further. If anything, what we could use right now is more confidence from the financial world in our industry, not less. On the other hand, banks shouldn’t throw stones, they were in it too, and shifting their responsibilities to the industry as they are doing today is just too easy.

The analysis above is not new, opinion leaders and industry experts have been saying for quite some time something is fundamentally wrong in the system. There is less consensus on what needs to be done now, especially in regards to what the producers are supposed to do. Some believe a 30 to 50% price cut for rough is needed to regain profitability for the trade and manufacturing and create the financial oxygen needed to push demand up. Others say a steep decline in prices will only make things worse for the manufacturers and could create billions in losses. They believe cutting rough supply drastically combined with moderate price declines is the only sustainable solution to straighten the situation.

Back To The Roots

Whatever the solution may be, it is clear not only the producers and the banks, but the industry itself must learn from the crisis, and search its own heart. “It takes two to tango”, they say, or in this case, three; rough producers, banks and the industry itself. The uncompromising willingness to keep buying rough at unprofitable prices and the unquestioning availability of bank credit in some places of the world to finance those purchases had nothing to do with what it is that we do, our business; diamond trading and manufacturing.

Growing up in a family business - and this will sound familiar to many of you - my parents taught me a few very valuable lessons; “there’s no such thing as a free lunch” was the first, “don’t spend what you don’t have” the second. Translated: a good business man knows that hard work pays off and he takes decisions based on facts, rational arguments and calculated risks. Those are the very foundations of our business and they are the key elements that, especially here in Antwerp, have enabled us to grow, despite the many crises our city and our industry were confronted with throughout many years and centuries even.

The recent discovery in Botswana of the second largest rough diamond ever found instantly made world news, not surprisingly it was all newspapers and social media talked about for days. For just a brief moment, the magic of our product was brought to life through a single, spectacular image, grabbing everyone’s attention. What this proves, is that our industry is far from dead. The fact there’s a real chance this extraordinary rough stone will end up in Antwerp, because this is the only place where the necessary expertise can be found to study and polish this remarkable find, is even better news. It confirms we need to keep investing in innovation and technology, in confirming and reinventing our craftsmanship.

The bottom line is that we need to go back to our roots, to the very essence that allowed Antwerp to become the capital of the global diamond industry in the first place; the unambiguous and honest added value of the Antwerp expertise in diamond trading and manufacturing that transforms a rough stone into a dazzling diamond.

More so, I am firmly convinced that by continuing on the path of transparency and innovation, and with the support of our partners, Antwerp is best placed to get out of this crisis.