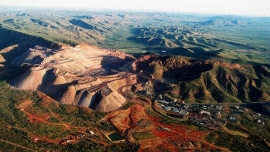 Rio Tinto has released its fourth quarter production results for 2015, reporting production of 4.27m carats of rough diamonds, or a 50% increase from the 2.84m carats mined in Q4 2014. This brought total production for 2015 to 17.4m carats, a 25% increase over the 13.9m carats recovered in 2014. At its Argyle Mine in Australia, the 2015 ramp-up of production from the underground mine delivered a 47% increase in carats produced compared to 2014. In Q4 2015, Argyle produced 3.37m carats, representing an 86% increase over Q4 2014. Due to process plant pauses to manage inventory levels, production in the fourth quarter was slightly below production in Q3. At the Diavik Mine in the NWT of Canada, Rio Tinto mined 11.5% fewer carats (3.8m) than in 2014 due to processing plant pauses in the fourth quarter and the absence of stockpiled ore, which had been processed in the first half of 2014. Its recovery of 899,000 carats in Q4 2015 represented a 3% decrease compared to Q4 2014.

Speaking of the production performance of Rio Tinto in Q4 2015, CEO Sam Walsh said, “In 2015, we delivered efficient production, meeting our targets across all of our major products, while rigorously controlling our cost base.” He also noted that, “Against a challenging market backdrop for the industry, Rio Tinto remains focused on operating and commercial excellence to leverage the low-cost position of our Tier 1 asset base. We will continue to focus on disciplined management of costs and capital to maximise cash flow generation throughout 2016.”