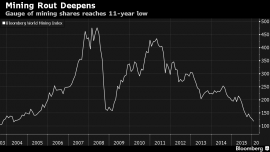 Bloomberg Business writes that Anglo American has led a collapse in mining stocks to the lowest level in more than a decade as market turmoil in China, the biggest consumer of metals, ignites a vicious spiral of tumbling equities and tumbling commodity prices around the world. The Bloomberg World Mining Index sank as much as 4.1% on 7 Jan., with Anglo sliding 12% at one point to a record low and Glencore down as much as 7.9% in London trading. The Bloomberg Commodity Index, a gauge of returns on raw materials, dropped to its lowest level since 1999 as industrial metals and oil declined. “It’s been a brutal start to 2016 and a continuation of the fears that characterized the second half of 2015,” Paul Gait, a mining analyst at Sanford C. Bernstein Ltd., told Bloomberg. This is “fear around a much more profound and much more significant slowdown in the Chinese economy." Miners have been battered by slowing demand in China and gluts in commodities such as copper and iron ore.

The 'vicious circle' works as follows: “Commodity prices get sold off because equities are falling, and the mining equities get sold off because commodities are falling," said Wiktor Bielski, head of commodities research at VTB Capital in London. It is no surprise then, as Mining.com writes, that "private capital won't touch mining." It is not that investment in resources are floundering - on the contrary. According to a new report by private capital tracker Preqin, fundraising for natural resources investment reached record levels in 2015, with 62 funds raising a total of $63bn. That was up 14% compared to 2014. Despite plummeting crude oil and natural gas prices, energy-focused funds were once again the main driver of growth in 2015, accounting for more than $9 out of every $10 raised during the year. Meanwhwile, a paltry 0.6% of private capital raised in 2015 for natural resource investment is for mining projects - one wind farm fund attracted more than the entire sector. Investment in agriculture and farmland in 2015 was nearly 10x that in mining.

To put the mining plunge in perspective, Thomas Biesheuvel and Jesse Riseborough write that, "The $1.4 trillion lost in global mining stocks since 2011 exceeds the total market value of Apple Inc., Exxon Mobil Corp. and Google’s parent Alphabet Inc." combined. To put Anglo's woes in perspective, they write that, "Anglo American, worth almost 50 billion pounds ($73 billion) in 2008, is now valued at 3.1 billion pounds. The 99- year-old company, which is the world’s biggest diamond and platinum producer and owns some of the best copper and coal mines, is now worth less than mid-tier Randgold Resources and copper miner Antofagasta Plc."