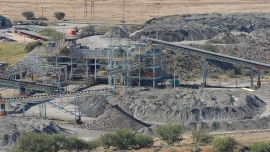 Mining Weekly reports that a month after De Beers Consolidated Mines (DBCM) sold its Kimberley Mines in South Africa, the National Union of Mineworkers’ (NUM’s) Kimberley Mines Branch demanded a review of the sale process, with a march planned against the mine sale on January 14. In December, DBCM sold its Northern Cape assets to a consortium comprising Kimberley-based surface diamond mining company Ekapa Mining and London-listed Petra Diamonds. The NUM remained opposed to the move, claiming that DBCM had failed to consult the union or prove that it had exhausted all avenues of seeing to its profitability beyond 2018. “We will demand that De Beers should sojourn the sale of this mine and restart the consultation process ... ensuring the sustainable employment and job security of our members and exhausting other options instead of setting employees up for possible downward variation of the conditions of employment,” the NUM said in a statement on Tuesday.