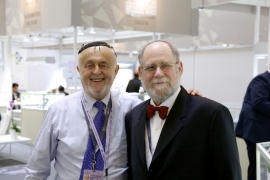 "Sightholders are looking for revenge for all the pain De Beers caused them over the years," writes diamond heavyweight Leibish Polnauer, founder of Leibish & Co., adding that, "The revolt of many of these Sightolders is imminent. They are fed up, and many of them want to see blood. De Beers ruled the industry with an iron hand for half a century, but their time has come to an end." Picking up the thread where Martin Rapaport left off in his incendiary open letter to De Beers in late November, Polnauer charts De Beers' history of overcharging for rough diamonds and their use of market control to bully dissenting Sightholders, but claims that their allocation system "is history." The difficulties facing Anglo American - which owns 85% of De Beers stock - and their need for immediate cash will force De Beers to continue the practices that Sightholders have long resented, and the Sightholders "smell the blood of the wounded."

The issue does not stop with AA, however, as Botswana is also in dire need of diamond revenue, yet De Beers stopped buying Botswana rough in November, leading Polnauer to one conclusion: "The next move of the Sightholders revolt is when they will buy rough directly from the Botswana government, and leave De Beers completely out of the picture. Botswana needs the money, and has the product. They no longer need De Beers, since the company was kind enough to make introductions back in 2013. Once the connections are made and logistics has been worked out, what would Botswana need De Beers for? The Botswana government forced De Beers to relocate the distribution of the sight to Botswana a few years ago. Now that everyone knows each other and have established a personal relationship between the miners and diamond manufacturers, all these sightholders will stand by and watch De Beers fall to the ground."