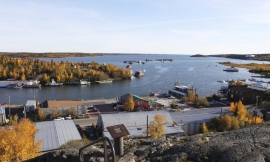 Reuters reports that unseasonably warm weather in Canada's Northwest Territories this year is threatening - or at least delaying the formation of - the vital, and world's busiest ice road. Ice formation has been slow on the Tibbitt to Contwoyto Winter Road, named after the first and last of hundreds of lakes on the route of a highway of ice built atop frozen lakes and tundra. The road serves as a supply lifeline to remote diamond mines, bustling with traffic for a couple of months before melting away in the spring. The road is still expected to open on schedule in late January, but if current weather patterns continue that could mean more work for crews trying to build the ice or cut the road's already short period of operation. Since 1982 it has been essential to a handful of mines scattered across the NWT, cut off by a maze of water and spongy tundra, otherwise only reachable by air. Running 400 kilometers (248 miles), it links to three diamond mines.

Climate scientists think this year's late freeze could be a harbinger of winters to come. It is Yellowknife's second warmest December on record, according to Environment Canada, Canada's national weather service. Ron Near, a retired Royal Canadian Mounted Police officer who manages the road for a group of mining companies, said that slow ice formation is a transportation problem, but it is not "panic time," as he expects the road to start operating by the end of January, with the heaviest loads waiting until a harder pack of ice at the beginning of March. The consequences of those warming temperatures pose an additional risk to mining companies in the NWT, where a half dozen planned mines are on hold due to multi-year low prices for gold, rare earths and other metals. A taste of the trouble warm winters cause came in 2006, when the road closed after just 36 days. Miners spent more than C$100 million to charter flights for fuel and began talking seriously about options like hovercraft and blimps.