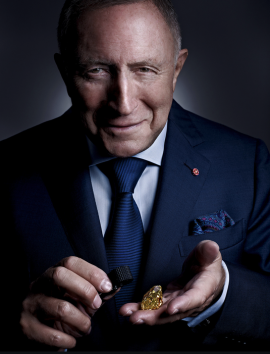 Financial Times' magazine, "How to Spend It", sat down for a chat with renowned diamond mogul Laurence Graff, chairman of Graff Diamonds. "It’s widely acknowledged throughout the world’s diamond and jewellery industries that he has an extraordinary affinity with diamonds, a sort of sixth sense that enables him to understand their individual characters, to see the subtlest nuances of light, fire and colour. And to perceive, often in an instant, a diamond’s full potential to be the best, the most brilliant, the most beautiful, the most valuable it can be. This innate ability has always been, and remains today, the authentic core of his business, and the driver of the brand because Graff pairs his profound passion for gems with one of the most astute, single-minded business brains in the luxury industry. It’s this rare combination of diametrically opposite talents, combined with a dealer’s quick wit, a trader’s super-salesmanship, legendary fearlessness and unshakeable self-belief, that has taken him from the trading bustle of Whitechapel’s Hessel Street market in London’s wartime East End, via an apprenticeship in Hatton Garden, to billionaire status."

The interview traces the contours of Graff's singular story and remarkable achievements - now detailed in a new coffee-table book, Graff - interspersed with quotes from the legend. On helping his mother run a sweets shop at the age of six: "“It made me street-smart,” he says. “And the war years hardened me I suppose, gave me nerves of steel, but also huge confidence, because I knew I had to rely on myself, look after myself. I’m not afraid of anything. Those early years taught me about survival and security.”  This nerve is demonstrated by his risk of repolishing (amid much controversy) the historic blue Wittelsbach-Graff and Graff Pink, for which he paid a record $46.2m in 2010 and then transformed, upgrading its colour and clarity to the pinnacle of perfection. On becoming a De Beers sightholder: “If you want to be successful with diamonds, you have to get as close to them as possible.”

Early next year Graff will open its first store in Paris, on Place Vendôme, the spiritual home of high jewellery. It is a major milestone in the stature of the company, a sign that Laurence Graff may well have established a heritage brand of the future and a dynasty of diamond jewellers.