2015: The Year of Exceptional Diamond Discoveries 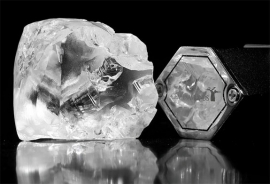 While diamond miners on the whole have had a rough year, as weak consumer demand coupled with a supply glut and a credit crunch among diamond traders have caused the price of stones ranging from 0 to 4 carats (ct) to fall considerably, it was also a year of exceptional diamond discoveries. Including Lucara Diamonds' unearthing of the second largest diamond ever recovered (1,111ct), by our count no less than 9 stones larger than 250 carats were announced in 2015, wheras a typical year might see 1 or 2 announcements (not all discoveries are made known publically). Mineweb has put together just a few of them - not necessarily the largest, but from origins as diverse as Canada, Russia and Tanzania - to remind us of the banner year that 2015 was for large diamond discoveries.